THE BOARD of Directors of Precision Air Services Plc, Tanzania, is pleased to announce its full year results for the year ended 31 March, 2013.  The company made a net loss of Tshs.30.4 billion (approximately US$18.84 million) against the prior year which stood at Tshs.1.2billion profit.

Overall, the Available Seat Kilometres (ASKs) grew by 10% whereas the Revenue Seat Kilometres grew by 16%. The total number of passengers uplifted over the period went up by 8.5% to 895,650 against 825,150 the previous year. The yield, however, declined by 9.4%. Total revenues grew by 8.2% to Tshs 176.4 billion largely driven by increased passenger numbers. This robust growth in passengers was attained even with increased competition in the domestic market.

Direct expenditures went up by 24% to Tshs.145 billion due to the increased cost of fuel and increased equipment related costs. Aircraft maintenance costs increased from Tshs.11.9 billion in 2011 to Tshs.23.6 billion in 2012; this was mainly due to the high costs of maintaining the Boeing 737 fleet. The gross profit margin therefore declined from 28% in the previous year to 18% (Tshs.31 billion against Tshs.46 billion the prior year).

The indirect expenditure grew by 18.6% to Tshs.42 billion, driven mainly by staff related costs that went up by 8% to Tshs.28.5 billion against Tshs.26.4 billion the previous year.  Financing costs grew by 8% due to overdrafts whereas the company accrued a loss in foreign currency exchange of Tshs.4.4 billion which is 50% more than the previous year. This is largely related to US dollar denominated borrowings for aircraft financing.

Loss on impairment of receivables grew to Tshs.8.6 billion from Tsh.0.3 billion, due to additional provisions made in relation to other carriers billing rejections that were unprocessed by year end. The net effect was a loss of Tshs.30.4 billion against a profit of Tshs.1.2 billion in the prior year.

Considering the performance, the group recognized the need to execute a turnaround. Towards that end, the Board has made changes in top management which has developed a new 5-year Strategic Plan already approved by the Board. The plan is focusing on the following areas:

So far, the actions taken have yielded positive results, says Precision Air.  The airline is chaired by its founder Mr Michael Shirima.  The Group Managing Director and CEO is Sauda Rajab, who replaced Mr Alphonse Kioko in March, 2013.

Precision Air recently reassured air travellers of its continued operations in Zanzibar following a story published in a local paper on 3 May, 2013, quoting a letter from the Zanzibar Revenue Board (ZRB) to Precision Air Services Plc threatening to “restrain departure of all flights operated by Precision Air, as well as closure of its offices,” over alleged unpaid taxes.

Speaking at Precision Air Services headquarters, MD and CEO, Ms Sauda Rajab, clarified the situation and reassured the travelling public of the continued operations in Zanzibar.   “We wish to notify our passengers and the Tanzania nation at large that your airline is still in full operation of its route to Zanzibar. Neither the Zanzibar Revenue Board (ZRB) nor the airport authorities have refused our fleet from touching on ground in the Spice Isles,” she said.

Ms Rajab confirmed that the Zanzibar Revenue Board had raised concerns which were discussed by both parties in a meeting held on Monday, 29 April, 2013, which resulted in a mutual agreement.  The airline (PW) is said to be receiving full support and co-operation from the ZRB. “This simply has been a matter of miscommunication between the parties but we are delighted that after our discussion our offices are indeed open for business and we welcome you all to continue with your travel plans. We couldn’t be in a better working relationship with the ZRB than we are today.

“Precision Air promises to continue being the safest and most competitive airline of choice in the country in providing need-based transportation services to all areas in Tanzania and beyond.”

Precision Air is the only airline in Tanzania listed on the Dar es Salaam Stock Exchange (DSE) and earlier this year was listed for the first time as a ‘Superbrand’ in East Africa.  Precision Air has a larger network than any other airline in Tanzania, with operational stations in 18 destinations within and outside Tanzania.  Dar es Salaam is its hub and it is now developing Mwanza as its second hub.  Over the past year, the airline added two ATR 45-600 aircraft, bringing their fleet to 9 ATRs and two Boeings. 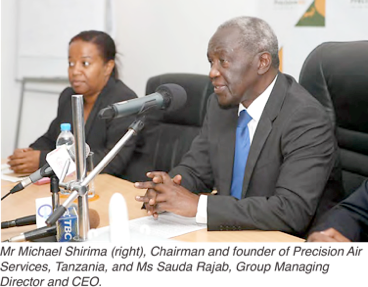