During the Airshow, René Decurey, Chief Executive Officer, Air Côte d’Ivoire said: “The dual-class-configured Q400 NextGen aircraft is ideally suited for our market; it will support passengers’ requirements and integrate well into our fleet. We will capitalize on the Q400 NextGen aircraft’s outstanding performance – including its high speed and long-range cruise capability – as we look to modernize our fleet and expand our domestic and regional route network. Additionally, in West Africa, where average fuel prices are among the highest in the world and the highest on the continent, the fast, fuel-efficient Q400 NextGen turboprop airliner is the most cost-effective and flexible regional aircraft solution for our operations.”

“The Q400 NextGen aircraft is performing extremely well in Africa where we now have 14 customers and operators, and more than 50 aircraft in service or on order,” said Mike Arcamone, President, Bombardier Commercial Aircraft. “We are very encouraged by our sales performance on the continent, having captured 100% market share over the last two years in the 20- to 99-seat turboprop segment.  “We’re delighted to be contributing to Air Côte d’Ivoire’s growth strategy, and look forward to helping the airline launch service with its Q400 NextGen aircraft,” said Mr Arcamone.

Bombardier’s Dash 8/Q-Series turboprops and CRJ regional jets have made significant advances in Africa to the point where these commercial aircraft now comprise 50% share of the fleet of 37- to 120-seat aircraft on the continent, with approximately 160 aircraft in service, or on order, by more than 40 operators.

Including the order announced today, Bombardier has booked 480 firm orders for Q400 and Q400 NextGen turboprops.  The Q400 NextGen turboprop is the most recent development in the evolution of the Q400 aircraft and the advanced successor to Bombardier’s Dash 8/Q-Series family of aircraft. Optimized for short-haul operations, the “comfortably greener,” 70- to 86-seat Q400 NextGen aircraft is a large, fast, quiet and fuel-efficient turboprop. It provides an ideal balance of passenger comfort and operating economics with a reduced environmental footprint.

Bombardier is the world’s only manufacturer of both planes and trains.  It is headquartered in Montréal, Canada. Its shares are traded on the Toronto Stock Exchange (BBD) and are listed on the Dow Jones Sustainability World and North America Indexes. In the fiscal year ended December 31, 2012, it posted revenues of US$16.8 billion. 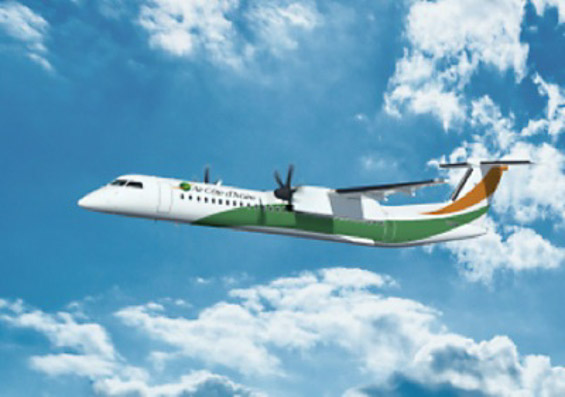