Since his appointment as Group Managing Director of Kenya Airways in February, 2003, Dr Naikuni has been widely acknowledged throughout Africa and the international aviation industry as one of the most knowledgeable, professional and committed aviation Chief Executives on the African continent. He has established a reputation for airline business acumen, management expertise and an exemplary record of service to African aviation.

Dr Naikuni’s far-sighted vision and strong leadership have transformed Kenya Airways into one of Africa’s foremost national carriers.  Eleven years later the airline has one of the most modern aircraft fleets and widest route networks on the continent and has also established a world-class training facility based in Nairobi.

Announcing the Award, the CEO of AFRICAN AVIATION, Mr Nick Fadugba, congratulated Dr Naikuni for his outstanding achievements as Group Managing Director & CEO of Kenya Airways and for his role in championing the African airline industry at the global level.  Mrs Elizabeth Onunga, Kenya Airways’ Area Manager collected the Award on behalf of Dr Naikuni. She stated that upon learning of his recognition, Dr Naikuni said that the Award was a great honour to him and the airline at large.  “I dedicate this award to colleagues at Kenya Airways and our valued customers, as well as our partners without whose contribution we would not be able to do all that we have over the years.  We will continue to focus our efforts in consistently delivering world-class service to our customers as we link Africa to the rest of the world,” he added.

His Excellency, Dr Mulatu Teshome, President of the Federal Democratic Republic of Ethiopia officially opened the African Aviation Summit 2014 & 23rd Annual ‘Air Finance for Africa’ Conference & Exhibition, Dr Elham Mahmoud Ahmed Ibrahim, Commissioner for Infrastructure & Energy, African Union Commission was the Conference Patron and Mr Workneh Gebeyehu, Minister of Transport, Ethiopia delivered the Keynote Address to the nearly 200 high-level delegates from Africa and around the world.  The Conference was hosted by Ethiopian Airlines which provided key support and assistance to the successful event.

The Theme of the Conference was: ‘The Next 50 Years:  The Role of the African Union (AU) in Supporting African Aviation.

The aim of the Conference was to further sensitise African Governments on the key role aviation plays in Africa and provide a high-level forum to focus on some of the critical challenges facing the African aviation industry today which need to be addressed.  The 50th Anniversary of the OAU-AU presented a unique opportunity to highlight to African Governments the critical role played by aviation in the continent’s economic and social development.  In particular, the Summit focused on the growing role of Aviation in Africa’s Economic Development over the next 50 years.

The Conference also presented a valuable opportunity for the African aviation and finance industry to meet with leading international aviation finance and leasing companies to discuss the latest financing opportunities and solutions, as well as to source aircraft.  The Conference provided a unique opportunity to network with industry colleagues and old and new friends.

The African Aviation Awards were introduced in 1999 by AFRICAN AVIATION in order to give international recognition to individuals, companies and organisations that have made an outstanding contribution to aviation development in Africa.

African Aviation was established 24 years ago, in 1990, as a vehicle for helping to promote aviation development on the African continent. ‘We firmly believe that aviation can be a vital catalyst for Africa’s economic and social development,’ said AFRICAN AVIATION  CEO, Nick Fadugba.

Prior to his appointment as Group Managing Director & CEO of Kenya Airways, Dr Naikuni served as Managing Director of Magadi Railway Company, a subsidiary of Magadi Soda Company, between August 1999 and March 2001 and was a member of the World Bank sponsored Kenyan technocrats, known as the “Dream Team”, who were engaged by President Daniel Arap Moi to turn around the Kenyan economy.  In this capacity he served as Permanent Secretary to the Ministry of Aviation, Transport & Communications and was a member of the Board of Kenya Airways during that period.  Dr Naikuni has had extensive boardroom experience having served on various company boards.  He is currently a board member of Maersk Kenya Ltd, Access Kenya Ltd, CFC Bank Kenya Limited, East African Portland Cement Co Ltd, Deputy Chairman, Magadi Soda Company Ltd, and a member of the Lafarge International Advisory Board.

Kenya Airways introduced its 10-Year Strategy called ‘Project Mawingu’ in 2012, the aim of which is to serve 115 Destinations in 77 Countries with a fleet of 107 passenger aircraft and 12 freighter aircraft.  It recently introduced its first Boeing 777-300ER and two Boeing 787-800 Dreamliner aircraft.  Another four Dreamliners will be delivered in 2014, as well as two more B777-300ERs and three B737-800NGs. 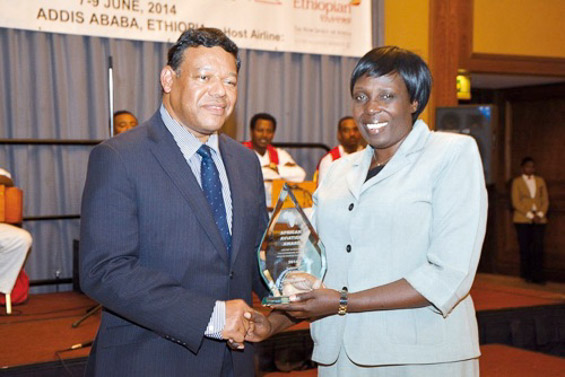 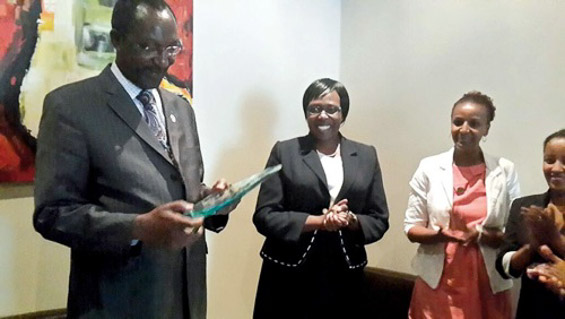