As Director General of the NCAA, Dr Demuren transformed the Nigerian aviation industry by strictly enforcing safety and security regulations and ensuring compliance with international best practices in the Nigerian airline industry.

In addition, he sucessfully led Nigeria through the ICAO Universal Safety Audit in 2006, the ICAO Security Audit in 2008 and the successful attainment of the United States FAA/IASA Category One Certification by Nigeria in 2010.

He also successfully secured the adoption of the Cape Town Convention by the Nigerian government which paved the way for the unprecedented modernisation of airline fleets in Nigeria during his tenure.

Announcing the Award, the CEO of AFRICAN AVIATION, Mr Nick Fadugba, congratulated Dr Demuren for his outstanding achievements in particular as Director General of the Nigerian Civil Aviation Authority (NCAA) and for his role in championing the Nigerian airline industry at the global level.

Dr Demuren thanked African Aviation for recognising his contribution to the African aviation industry after he had retired as Director General of the NCAA and noted that former officials in Africa are often not recognized for their earlier contributions. He reiterated his continued commitment to promoting aviation safety and security both in Nigeria and in Africa as a whole.

Dr Demuren has served on several ICAO Council Working Groups on Environment including the GIACC and informal DGCA Climate Group and also served as the Chairman, ICAO African Indian Ocean Regional Aviation Safety Group (AFI-RASG). He was elected President of the 37th ICAO General Assembly in Montreal in October, 2010 and awarded the prestigious Laura Taber Barbour Air Safety award from the FlightSafety Foundation (FSF) for his contribution to aviation safety globally. He is also a member of the Board of Governors of FSF.

Dr Demuren has been a Regional Team Leader working vigorously for the COSCAP/Banjul Accord Group and its successful transition to BAGGASOO, (BAG Regional Safety Oversight Organization).  He has played a remarkable role in the implementation of the Global Aviation Safety Roadmap, the AFI - Plan and the enhancement of aviation security measures in the aftermath of Christmas Day (25th December, 2009) Bombing attempt on the US Bound North West Flight 253 and Removal of Nigeria from "US Countries of Interest Watch List". He is also a member of the Board of Directors of Frontier Service Group (FSG).

The African Aviation Awards were introduced in 1999 by AFRICAN AVIATION in order to give international recognition to individuals, companies and organisations that have made an outstanding contribution to aviation development in Africa.

AFRICAN AVIATION was established 24 years ago, in 1990, as a vehicle for helping to promote aviation development on the African continent. ‘We firmly believe that aviation can be a vital catalyst for Africa’s economic and social development,’ said AFRICAN AVIATION CEO, Nick Fadugba.

His Excellency, Dr Mulatu Teshome, President of the Federal Democratic Republic of Ethiopia officially opened the African Aviation Summit 2014 & 23rd Annual ‘Air Finance for Africa’ Conference & Exhibition, Dr Elham Mahmoud Ahmed Ibrahim, Commissioner for Infrastructure & Energy, African Union Commission was the Conference Patron and Mr Workneh Gebeyehu, Minister of Transport, Ethiopia delivered the Keynote Address to the nearly 200 high-level delegates from Africa and around the world. The Conference was hosted by Ethiopian Airlines which provided key support and assistance to the successful event.

The Theme of the Conference was:  ‘The Next 50 Years:  The Role of the African Union (AU) in Supporting African Aviation.

The aim of the Conference was to further sensitise African Governments on the key role aviation plays in Africa and provide a high-level forum to focus on some of the critical challenges facing the African aviation industry today which need to be addressed. The 50th Anniversary of the OAU-AU presented a unique opportunity to highlight to African Governments the critical role played by aviation in the continent’s economic and social development. In particular, the Summit focused on the growing role of Aviation in Africa’s Economic Development over the next 50 years.

The Conference also presented a valuable opportunity for the African aviation and finance industry to meet with leading international aviation finance and leasing companies to discuss the latest financing opportunities and solutions, as well as to source aircraft. The Conference provided a unique opportunity to network with industry colleagues and old and new friends.

With over 40 years of experience in both the public and private sector of the aviation industry, Dr Demuren has spent most of his professional career as a proponent of Aviation Safety and Security, especially advocating and spreading Safety Regulatory Oversight on the African continent. He started his career with the Federal Ministry of Civil Aviation in Nigeria as an Airworthiness Surveyor and after a change of direction as CEO of cargo airline Afrijet Airlines, he was appointed as the Director General of the Nigerian Civil Aviation Authority in 2005, a position he held until March, 2013. 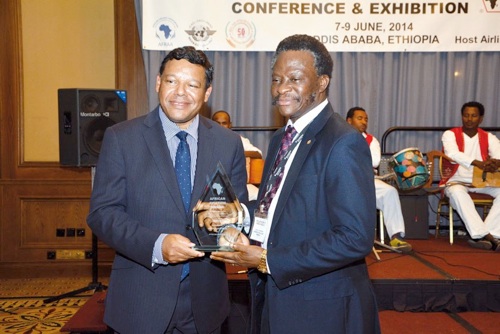