ETHIOPIAN AIRLINES has won the African Aviation ‘African Airline of the Year’ Award for 2016 in recognition of its Financial Performance, Fleet Modernisation, Route Network Expansion, In-Flight Service, Overall Customer Care and its Outstanding Contribution to Aviation Development in Africa.

“Ethiopian Airlines (ET) continues to set the pace through its tangible achievements and is a source of great pride to Africa,” said Mr Fadugba. “In addition, ET has also excelled in the provision of technical services to African and non-African airlines and has made an enormous contribution to the development of Aviation Human Resources for the African continent, particularly in the fields of aircraft maintenance, and pilot and cabin crew training.”

Responding, Ethiopian Airlines’ COO, Mr Mesfin Tasew, said: “On behalf of ET Executive Management, I would like to formally thank African Aviation in general, and you in particular, for recognizing the achievements of ET with the African Airline of the Year 2016 Award. It is a recognition of the visionary leadership of ET’s top management, and the hard work of thousands of ET employees. We are very pleased to win this Award this year.” 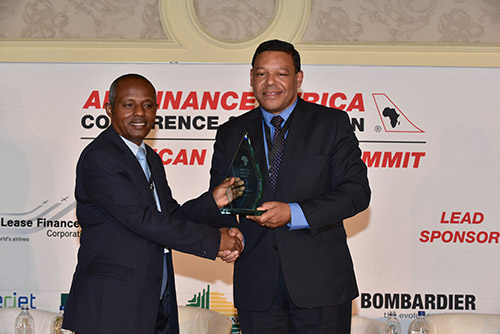